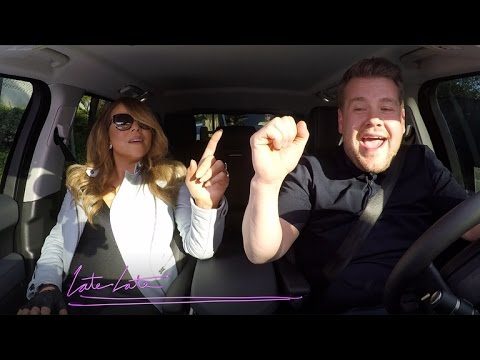 The We Belong Together singer was the first ever celebrity to feature in the The Late Late Show with James Corden sketch, in which music stars drive around with James in a car, singing to their own hits on the radio.

Mariah didn’t know what to expect from the now-famous segment, and when she turned up to film it at the start of 2015, she told James she wouldn’t be singing – despite the nature of the skit.

“She came out and said, ‘I’m not singing today,’ and she went, ‘We’ll just drive around and have a chat,’ James recalled to radio host Howard Stern on Monday (06Jun16). “I went, ‘Right, we think we’re gonna call it Carpool Karaoke… So without that…’

In the final version of Mariah’s Carpool Karaoke she light-heartedly tells to James that she’s “not singing today, I was up all night” as he turns on the radio to play one of her songs, but it takes her no time to relent and she sings along.

“There’s a very definite moment, but to her credit, she got involved and it was wonderful,” James added to Howard.

James explained that it took months of pitching to musicians, from A-list stars to “fifth rate” acts, and they all refused to take part in the unknown sketch.

“If you imagine an artist – just think of any artist in the world – they said no to it,” he said. “I mean, everyone, genuinely… I’m talking, like, whos the dudes who did Cotton-Eyed Joe? We were in those sorts of territories… And they’re like, ‘I’m not doing that.'”

He managed to secure Mariah by having a chance meeting with a mutual connection, who then presented the idea to the singer. When she finally agreed to do it and they organised a day for filming, James admits “you just s**t yourself” because he really wanted his idea to work.

Stars including Adele, Justin Bieber, Stevie Wonder and Gwen Stefani have since taken part in Carpool Karaoke. Adele’s sketch has been watched more than 107 million times on YouTube.com.